Here’s a list of Jet’s Top Ten protagonist picks. My opinions may change over time to be sure to check back regularly! Who are your favorite protagonists? Do you have any of the ones below in your list? Let me know!

The chirpy little potato looking guy we all grew to love since 1995 over many platforms, following his heroic journey through the world with his friends, investing in them too especially Globox is a sensitive glute who is supposed to be Rayman’s sidekick. He is very cowardly, running away at the sight of any enemies, leaving him  alone to fight them which makes our Sprite even more of a hero, so here is to Rayman, you’re in my top ten protagonists in the gaming world!

John has always thrived by being the leader in life, both as a child and as an adult. Before becoming a spartan, there was never a game John could lose, including chess, gravball and King of the Hill. In adulthood, John learned the value of life, putting others before his obsession to win, but he has always been a leader and always will be. Master Chief, the spartan of all Spartans has brushed with death many times. John’s main traits is his probably his luck Dr. Halsey and Cortana mention this throughout the Halo series. I have to agree, that dude has outlived the toughest of the tough. He deserves a medal, so the next best thing is being in my top ten, go Master Chief! You are one hell of a strong character and have so many people investing in you.

Now, we all know Lara Croft as the main character in the Tomb Raider game series. Lara has survived a plane crash. Lara has lost her parents, has been betrayed by friends, lost her mentor and been left stranded in the wilderness to fend for herself. Not an easy life by all means. We all know Lara for her tank tops and shorts attire and pony tail braids. You rarely see Lara wielding anything other than a hand gun or shot gun and has been kept consistent throughout her portrayals in the universe. Since her debut in 1996 Lara has set the benchmark for female video characters to come, not looking like your average unrealistic barbie doll image. The Tomb raiding archaeologist, daughter to Lord and Lady Croft is one of the biggest game titles to date, still going strong so for this she is going in my top ten, Here’s to you Lara!

Lt Commander Shep is the main human protagonist in the Mass Effect series. Shep’s gender, skills and appearance are all variable through out the games and will always have an in pact on the outcome of the game,  you make Shep who he/she is. Born April 11, 2154, Shep is a graduate of the Systems Alliance N7 Special forces. Shep becomes the first human to join the Spectres, a special task force for the Citadel Council. Depending on the Pre-Service history paths you take, all determine how you see/speak about your Shep character, but none the less, Shep is a hero who put his life on the line for others. Many people will agree with me that Commander Shepard is one of the biggest characters in our generation of gaming. 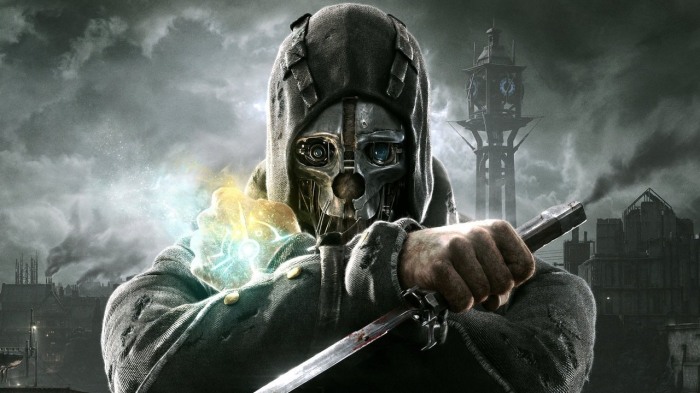 Corvo is the protagonist in the Dishonored games (one of two protagonists in Dishonored 2) Once the Royal protectors to the Empress Jessamine Kaldwin (Mother to Emily Kawldwin) After the death of Jessamine, Corvo is accused of her murder and stripped of his role, and imprisoned in Dunwall by Lord Reagent. After escaping from the prison he is then assigned as an assassin by the Loyalists. Corvo enters a mysterious world called The Void and is granted powers by the Outsider and a mark is imprinted on his hand. His aim is the clear his name and avenge the death of Jessamine and return abducted Emily and restore her rightful place in the throne. In Dishonored 2, he is once again the empressed Royal protector but also her father. During his daughter Emily’s reign, they find themselves up against Delilah Copperspoon, Jessamine’s sister. The plan is once again to restore order in Karnaca/Dunwall by eliminating Delilah. It goes without saying that Corvo is one heck of a protagonist with some incredibly bad-ass moves, you can be stealthy or cause chaos, either way Corvo get’s the job done. An unsuspecting family man at heart, he’s one of my all time favorite characters in the gaming world.

Geralt is a witcher and the main protagonist of the Witcher video games. Likewise with all Witchers, Geralt is a rent-a-monster hunter. As well as being a master swordsman, he possessed super human abilities. Like a lot of open world RPG games Geralt will follow the path you want him to, his abilities and outcome depend on you, however his personality is something consistent through the game series. Geralt doesn’t appreciate being provoked or bossed around, he’s known to be merciless to people who quite frankly don’t deserve his respect. By nature he is a lonely outcast, the black sheep perhaps but if treated with respect and kindness, behind his cold exterior he hides a fiercely loyal friend, and a man of good humor and a man with a stack of great advice in his head. He’s also quite easy on the eye for us women! He’s going in my top ten, for sure.

I’d say this one is more on the humorous side of my choices, seeing as I can rarely take a GTA character seriously considering the absolutely ridiculous things you can make them do using cheats or just generally messing around in between missions. But dear Yugoslavian Niko Bellic is a character I enjoy playing. I do silly things like run away from his cousin Roman when we are supposed to be having a nice game of bowling, I remember driving in the car with Roman once and jumping out the car whilst it flew off a pier, still with Roman in the car. I found it hilarious, that’s why I can’t take it seriously but along with Tommy Vercetti, he’s one he’s one of my all time favorite GTA playables.

“A capable treasure hunter with a knack for getting in over his head, Nathan Drake possesses both a deep knowledge of history and the devil’s own luck. Though his involvement in treasure hunting provides him with the adrenaline rush he so craves, it hasn’t yet yielded much in the way of actual treasure. Loves: researching ancient civilizations and lost artifacts. Hates: clowns.“— Official Uncharted 4: A Thief’s End bio. I think I speak for many when I say Nathan Drake is up there with some of the biggest protagonists in gaming history, almost like a male Lara Croft, not super human, just your regular guy with the strength and courage of a lion. A strong, inspiring character so many people have grown to love and invest in.

“I have lived my life as best I could, not knowing its purpose, but drawn forward like a moth to a distant moon; and here at last, I discover a strange truth. That I am only a conduit, for a message that eludes my understanding.”―Ezio Auditore da Firenze on his role as “the Prophet” Ezio was born in Florence, Italy on 24 June 1459, as the second son and child of Giovanni and Maria Auditore. He appeared to be stillborn, but, after some words of encouragement from his father, he began to cry, leading his father to call him a “fighter”. Other than his insane parkour skills, Ezio is known as one of the most memorable characters in gaming history and although I haven’t put him high in my top ten, this doesn’t change the fact is many peoples all time favorite character in video games. Assassins creed is an incredible story. In books and now movie, Ezio is undoubtedly a fascinating character and deserves to be in my top ten.

Now, I have left this one for last, as you many know Danse is actually an NPC from Fallout 4, but that doesn’t hide the fact he is one of my favorite characters from the last 2 years of gaming. I didn’t put him any higher as he is an NPC and technically doesn’t count as a protagonist, but the path I chose, made him a hero in my eyes. Paladin Danse is a soldier in the Brotherhood of Steel, he is one of Arthur Maxson’s most respected soldiers and is unbeknown to everyone, a Synth who you must chose the fate for after Arthur finds out, I chose to spare his life as he pleaded for his life, swearing he did not know he was a synth, he can then become a companion to your fallout character and wander the wasteland with you. I believe he deserves a place in my top ten, as he is a good guy in my eyes with a really strong story behind him considering he’s only an NPC. Screw the institute, I’ve got your back Danse!